All homes (132)
Add features
What’s important in your next home? 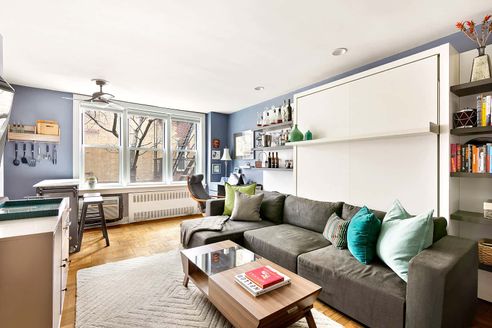 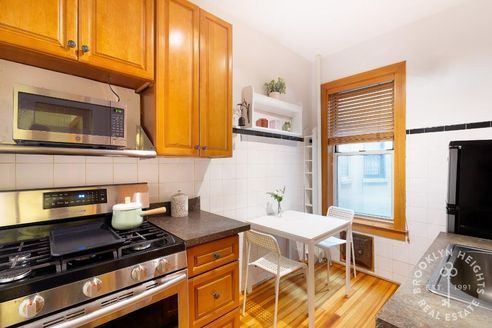 Brooklyn Heights is one of NYC’s most recognizable neighborhoods due to its proximity to the Promenade, which offers panoramic views of the lower Manhattan skyline. This neighborhood is popular with families for its tree-lined quiet streets, great schools, and ample playgrounds.

There’s a variety of quaint shops and independent restaurants around and nearly a dozen trains running through it that can get you to lower Manhattan in 15 minutes or less. It's also a historic district, which means that its beautiful brownstones and ornate architecture are there to stay, but these residences come at a premium price.

The History of Brooklyn Heights

The native Lenape had been living along these bluffs for centuries when the Dutch arrived in 1646 to form the Village of Bruecklen. The area remained rural for over a hundred years until Robert Fulton introduced ferry service to Manhattan in 1814, at which point Brooklyn Heights became a favorite among Manhattan’s elite. By the time the Brooklyn Bridge opened in 1888, Brooklyn Heights had cemented its status as one of the most sought after neighborhoods in the city, a distinction it still holds to this day.  Brooklyn Heights has retained its historic charm and remains an attractive (and expensive) option for anyone looking for small-town charm within minutes of lower Manhattan.

As of 2018, there were just under 25,000 people living in Brooklyn Heights. The area is predominantly white but also has small Puerto Rican and South Asian populations. The median household income here is more than double the NYC average, and there are slightly fewer families here than there are in other neighborhoods.

Brooklyn Heights residents enjoy easy access to the A, C, R, 2, 3, 4, and 5 trains with trips to Manhattan taking well under 15 minutes. There is also a new ferry terminal at Brooklyn Bridge Park which can shuttle commuters across the river to Wall St. in under ten minutes.

Brooklyn Heights is home to some of the oldest buildings in Brooklyn, and the neighborhood is famous for its palatial townhomes and ivy-covered carriage houses. Most buildings here were built before WWII and many homes date from the early nineteenth century. Much of Brooklyn Heights falls within a designated historic district, which puts significant limits on alterations and development - unsurprisingly, there’s been very little new construction here since 1980. Most homes have over 20 units, as evidenced by the elegant apartment buildings that line the Promenade, but there are many single-family townhomes as well.

Brooklyn Heights is one of the most expensive neighborhoods in the city and has been for decades - as such, real estate prices are unlikely to fluctuate much since the neighborhood’s desirable location and historic homes will continue to attract homebuyers for years to come.

The Truth You Should Know About Brooklyn Heights

How safe is Brooklyn Heights?

The crime rate in Brooklyn Heights is very low. The area is generally very walkable and safe for pedestrians, however Clinton St. and Cadman Plaza are often bottlenecked with traffic.

Are the Schools in Brooklyn Heights Good?

The schools in and around Brooklyn Heights are rated very highly, including PS 29 John M Harrigan and PS 8 Robert Fulton. The area is also home to prestigious private institutions such as the St. Ann’s School and the Brooklyn Montessori School.

Brooklyn Heights has a wide range of great restaurants for such a small neighborhood, including: @grid

What to do in Brooklyn Heights?

Yes! With its easy access to the Promenade and six enclosed dog runs, Brooklyn Heights is a dog owners paradise. There are also over 200 dog sitters in the area, meaning that your fur baby will be well taken care of when you’re ready to get out of town.

Is Brooklyn Heights Good for Cycling?

Cyclists can enjoy bike lanes along Clinton and Henry St, as well as paved cycle tracks in Brooklyn Bridge Park. Commuters can use the Brooklyn Bridge BIke Path for easy and safe commutes into Manhattan. There are 12 Citi bike-share stations and several charming bike shops in Brooklyn Heights.

5 Things to Know Before Moving to Brooklyn Heights