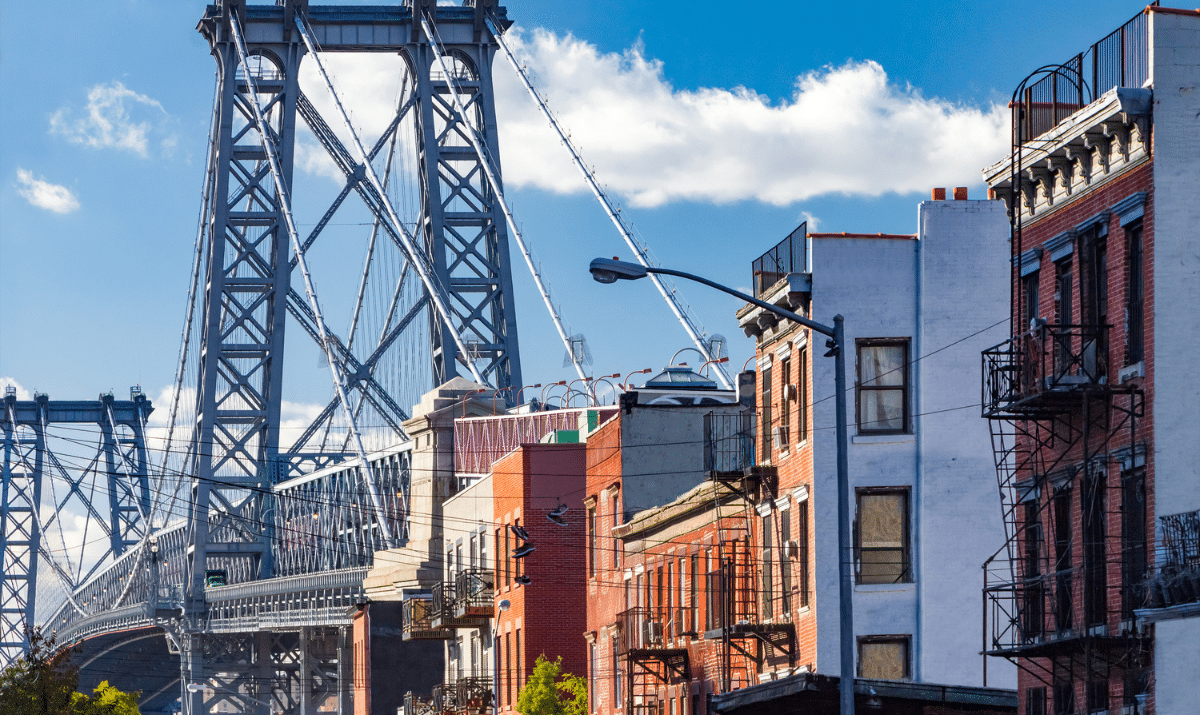 The Williamsburg neighborhood, as we now know it, developed over centuries. The land once consisted almost entirely of large farms, and the Dutch West India Company first named the area “Bosjwick”, or “place of the woods” when they settled in the area in 1660. This was anglicized to “Bushwick” when the British took over a few years later, before Jonathan Williams surveyed and developed the land around today’s Metropolitan Avenue, naming it “Williamsburgh” after himself in the early 19th century.

As Williamsburgh developed into a major port and industrial hub, it separated itself from Bushwick altogether, dropped the “h”, and merged with the rest of Brooklyn in 1855. Much more has changed since then, but relics of the area’s past remain. Here are a few spots for revisiting Williamsburg’s history through some of the neighborhood’s preserved historic architecture.

Originally known as the “East River Bridge”, the Williamsburg Bridge connects Manhattan’s Lower East Side at Delancey Street to Broadway on the Brooklyn side. The bridge is 135 feet high at its center and features an unconventional design in which the side spans are supported by their trusswork instead of cables. The Williamsburg Bridge took seven years to build, and was the longest suspension bridge span worldwide until 1924. When it was completed in 1903, thousands of immigrants who’d previously occupied Lower East Side tenements relocated across the river. Williamsburg’s population grew so quickly between 1900 and 1920 that the neighborhood became the most densely populated area in New York City in that time.

Originally built in 1856, Williamsburg’s Domino Sugar Refinery processed a majority of the country’s sugar by 1870. Its original complex — comprised of several buildings on Kent Avenue between South 2nd and South 6th Streets — was completely rebuilt after a fire in 1882. The refinery stopped operating in 2004, and much of the 11-acre site has since been demolished to make way for new residential and commercial space. But the Pan, Filter, and Finishing House, a largely brick building and one of the tallest in Brooklyn at the time of its construction, was designated a New York City landmark in 2007.

Located between South 2nd and South 3rd streets, this landmarked portion of the refinery was factored into the design of Domino Park, a 6-acre public park on the East River whose southernmost edge sits near the foot of the Williamsburg Bridge. It includes a playground and outdoor dining areas, among other modern features, but its design is especially notable for featuring salvaged artifacts from the refinery, including conveyors, cranes, and tanks that helped move and store sugar through the factory as it was processed.

Two former headquarters of the now defunct Williamsburg Savings Bank are still standing today: One Hanson Place just off of Flatbush Avenue in Brooklyn’s Fort Greene neighborhood, and the original, at the intersection of Broadway and Driggs. This Williamsburg location, designed by Beaux-Arts architect George B. Post and listed on the National Register of Historic Places, was incorporated in 1851 and opened to the public in 1875. The former financial institution was purchased in 2010 and converted to Weylin, a multifunctional event space. The building’s restoration preserved many of its original features, including a mural by artist Peter B. Wight that covers the rotunda’s domed ceiling.

Located on the border of Brooklyn’s Williamsburg and Greenpoint neighborhoods, McCarren Park first opened in 1906 as Greenpoint Park. Renamed for state senator Patrick McCarren three years later, the public park spans 36 acres over four city blocks, but its most notable feature is its swimming pool.

In the 1930s, the Works Progress Administration, one of President Roosevelt’s New Deal agencies, developed a series of recreational facilities nationwide, including 11 public pools in New York City in 1936. The one in McCarren park, the size of three Olympic pools combined, was one of the largest in the world at the time of its construction. It was closed in 1983 for repairs, which were then stalled by community opposition. The project was abandoned for more than 20 years, and the site briefly repurposed as a concert venue between 2005 and 2008. It was finally restored in 2012 after a $50 million renovation.