We Found the Buildings with the Most Shade

Knowing how much sunlight a home gets is nearly impossible before you visit, and even when you do visit, you may not get the full picture.

Take 213 Park Ave. South, for example. If you go to the five-story luxury rental during the winter between 2 and 4 p.m. — common times for open houses — you’d think the apartments got great, bright light.

What you wouldn’t know is that those are basically the only two hours when there is direct sunlight during that time of year.

This Park Avenue South building that was once home to the legendary Max’s Kansas City — frequented by Andy Warhol, the Velvet Underground and countless other artists — now has four lofts with private keyed elevators. A three-bedroom apartment listed in February asked $14,000 a month.

This address has another distinction: It’s among the top 10 Manhattan residential buildings with the least amount of direct natural sunlight, according to the groundbreaking analysis from Localize.city.

Having good sunlight at home is often a “must-have” for New Yorkers, yet it’s one of the most difficult things to verify. You can’t tell by browsing apartments online. You have to make the time and effort to visit every home to know for sure. And even if you visit on a summer morning, you can’t know what it will be like in the afternoon. The sunlight situation come winter will also likely be different.

Localize.city has solved this problem.

Data scientists at Localize.city, a website that provides insights for every address in New York City, created an algorithm assessing the sunlight and shade at every building in the five boroughs. You can search any address, and Localize.city will describe the direct sunlight on every side of the building, throughout the year. The descriptions include the brightest hours of the day, along with how different floors are affected by shadows cast from surrounding buildings. 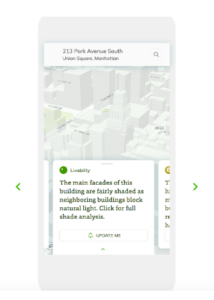 Visiting Localize.city reveals that 213 Park Ave. South, which is surrounded by much taller buildings, only gets about 2 hours and 30 minutes of direct sunlight on its main facade in the winter. The sun will hit between 1:55 and 4:25 p.m. In the summer, if there were no surrounding buildings, this five-story structure would get up to six hours and 45 minutes of direct sunlight — from 1:40 to 8:25 p.m. Instead, however, 71 percent of the direct light is blocked during that time span.

When you visit  Localize.city‘s “Insight Engine” — created by data scientists, urban planners and cartographers — you will learn what’s happening on the other facades of this building, as well. The southwest facade would get nearly 9 hours of direct light in the winter and summer — that is, if no other buildings blocked the sun’s path. But surrounding structures block nearly 100 percent of that light.

Maybe the lack of direct bright light was appealing for artists, many of whom probably spent more time at Max’s at night anyway.

Get the Full Story about Sunlight for Every Building

Localize.city data scientists and GIS experts took complex, three-dimensional out-facing geometrical shapes of every building in New York City. They measured the amount of sunlight exposure each building could potentially receive and then created a model to figure out how much of that light was blocked by neighboring structures.

The analysis revealed, for instance, how new buildings that may seem brilliantly bright might soon be cast in shadow within a few years as new structures are built around it.

That’s what’s happening, for instance, on the Williamsburg waterfront.

In the first wave of new development along the Williamsburg waterfront a decade ago, came Edge’s south tower, a 15-story condo built at 22 N. Sixth St. in 2008. It was joined by a 29-story condo, 1 Northside Pier, and its 30-story sister, 2 Northside Piers.  In 2014, the rental at 1 N. Fourth Pl. rose nearby to 41 stories. These four towers all cast shadows on each other.

Above: Summer views of how the shadows change throughout the day on these four buildings, looking from the south.

Zooming in on 2 Northside Piers, Localize.city found that during the summer, its neighbors block 67 percent of the northwest facade’s direct light, taking a significant bite out of the facade’s direct sunlight, which lasts 6 hours and 25-minute stretch on June 21. In the winter, this facade is exposed to a mere hour and 35 minutes of direct sun on Dec. 21 — but its neighbors block 78 percent of that direct sunlight.

While these Williamsburg buildings were not in the top 10 for buildings that are most shaded overall — most of those building tended to be smaller ones surrounded by taller buildings — they are among the city’s largest buildings with the most shade.

Zooming in on specific addresses: Below are each borough’s top 10 most shaded apartment buildings with four or more units