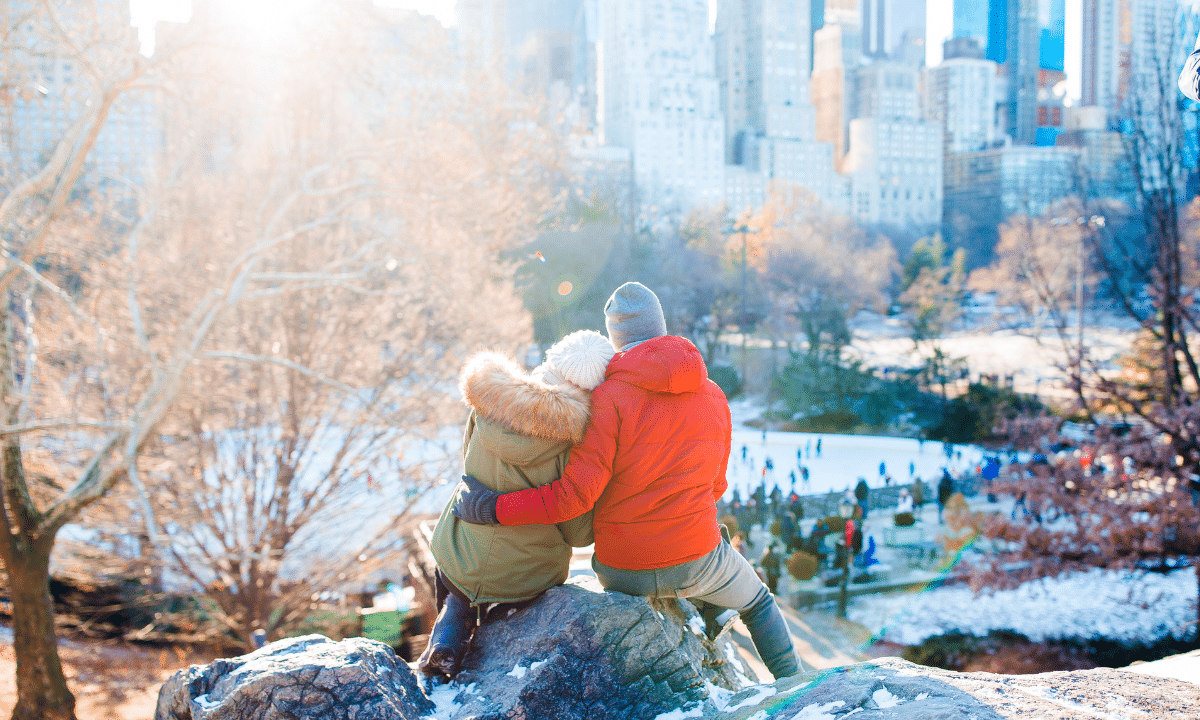 With sprawling parks, riverfront views, colorful storefronts, and eclectic architecture, New York City is easy to fall for, no matter which part you may find yourself in. This is as true in film as it is in real life, making New York the perfect backdrop for cinematic love stories. Just in time for Valentine’s Day, here are some of our favorite romantic comedies where the main characters may fall in love with each other by the end, but the ultimate love affair — if you’re really paying attention — is with the city itself.

This quirky love story starring Cher as Loretta Castorini and Nicolas Cage as Ronny Cammareri puts a lot of New York on display. It includes scenes as varied as a Greenwich Village Cafe to the interior of Loretta’s family brownstone in Brooklyn Heights, not to mention the Downtown Brooklyn bakery owned by the eccentric Ronny. And although she’s engaged to his brother, Loretta agrees to a date with Ronny — to see La Bohème at the Metropolitan Opera House at Lincoln Center.

Soon after they find themselves admitting their feelings for each other — where else — but on a Brooklyn sidewalk in the falling snow. That’s amore for both of them. Moonstruck was nominated for six Academy Awards, which didn’t include a consideration of the city as best supporting actor, although it probably should have.

Based on its title alone, this 2003 rom-com suggests that the main characters won’t go anywhere near falling in love by the end. Kate Hudson’s Andie and Matthew McConaughey’s Ben each place their own bets against an honest relationship in the beginning and give each other a bit of a run around throughout the film as a result. But as they spend more time together — and run around the city, too — Andie and Ben end up head over heels for each other. Dates include a Knicks game at Madison Square Garden, a movie at Cinema Village near Union Square, and a ride on the Staten Island Ferry to visit Andie’s parents.

In the movie’s final scene, they share a kiss in the middle of the Manhattan Bridge. The East River views are just as good from the bridge’s pedestrian walkway, where we recommend standing if you want to try to recreate this romantic moment.

No list of favorite New York City rom-coms would be complete without this classic. The initially platonic relationship between Billy Crystal’s and Meg Ryan’s title characters spans many years and includes visits to different New York points of interest each time they (re)connect. Scenes include Harry walking through the arch at Washington Square Park, Sally lunching at the Loeb Boathouse in Central Park, and the pair visiting the Metropolitan Museum of Art together.

The most iconic moment, of course, takes place at Katz’s Deli on E. Houston Street on the Lower East Side. Throughout the film, there are many moments when the audience may wonder “will they or won’t they?” when it comes to Harry and Sally’s relationship. But viewers will never have a doubt about both characters’ love for the city.

Any neighborhood in New York’s boroughs can feel especially magical when it’s the backdrop for people falling in love, and there’s no shortage of films that embrace this fact. This list is just a few of the many romantic comedies that can put anyone in the mood for love in New York– this Valentine’s Day or any day of the year.