We’re here to satisfy your curiosity and tell you everything about the NYC homes of the rich and famous that are currently on the market. Let’s explore!

With New York City being home to ABC, CBS, and NBC, the three major American television networks, it’s no wonder celebrities and stars have chosen this city as home. A few news stations that are filmed in NYC include NBC Nightly News, MSNBC, Inside Edition, CBS Evening News, Good Morning America, and ABC News. Some notable shows that have come out of these NYC studios are Law & Order, The Cosby Show, Saturday Night Live, Sex and the City, Ugly Better, 30 Rock, Gossip Girl, and many more.

With the abundance of news and tv shows produced in New York City and the large number of celebrities living here as well, many tourists come to visit in hopes of visiting the places stars live and hang out. A great way to experience the Big Apple life of luxury is by using this map to research not just celebrity houses, but also where they eat and unwind!

New York City is home to many celebrities, whether it be singers, actors/actresses, athletes, or many others! If you’ve been spending your time catching up on TV shows, movies, and maybe even watching music videos, you’re probably wondering “where do celebrities live?” and “what do celebrity houses in New York City even look like?”

Whether you dream of living in the same building or neighborhood as your favorite celebrity or even just wondering about how luxurious their homes look like in the city, we’re here to answer all your questions. Here are just a few NYC buildings that are popular with the celebrities:

This residential building in Tribeca has attracted many celebrities in the past. If you purchase a condo space in Tribeca, you can find yourself living next to celebrities like actor and film producer Jake Gyllenhaal, singer Justin Timberlake and his actress wife Jessica Biel, English singer and songwriter Harry Styles, actress Meg Ryan, and actress Blake Lively and her actor husband, Ryan Reynolds.

The luxury apartment building was built in 1905 and has 53 units in total. It is also located within the Tribeca North Historic District and the neighborhood has a slightly below average crime rate. A few building amenities include 24 hour doorman and concierge, a roof terrace, a landscaped lobby courtyard, a 75 foot long indoor pool, and much more. However, the biggest factor that has attracted many celebrities is its privacy.

443 Greenwich has paparazzi-proof amenities such as private elevators, a double-gated parking garage, and a 24/7 parking attendant. These amenities prevent paparazzis from being able to enter the building or parking area at all and the private elevators ensure celebrities won’t have to ride it with another person. As many stars are always under the public eye, it’s no wonder aspects of privacy and anonymity are popular with celebrities and is the reason many have flocked to this particular condominium building.

Here are the two currently available listings on the market for units in 443 Greenwich:

The Standish was once the Standish Arms Hotel that was built in 1903 with 122 rooms. However, in 2017, the hotel was converted into luxury condominiums by transforming the 122 rooms into just 29 resident spaces. It’s celebrity residents include actor Matt Damon, who purchased the most expensive apartment in Brooklyn’s history, and actress Emily Blunt and her husband actor John Krasinski.

The once Beaux-Arts building was refurbished by DDG and Westbrook Partners and condos feature a modern take of pre-war designs. This pet-friendly building has open, panoramic views of the Manhattan skyline and New York Harbor. Some of its amenities include 24-hour doorman and concierge service, a landscaped rooftop terrace with beautiful views, fitness center, children’s playroom, bike storage, and much more.

If you love watching movies and TV shows, then you’ll be excited to know that there is a unit on the market in The Standish! However, it is important to note that this space is not available for occupancy, but as an investment purchase opportunity:

This Manhattan condo building has attracted many celebrities such as actor Leonardo DiCaprio, model Tyra Banks, American film producer Oliver Stone, and English actor Sacha Baron Cohen. Riverhouse is a 31 story building with 253 units built in 2006. Additionally, the building interiors were oversaw by David Rockwell and the architecture was done by Polshek Partnership Architects. These big name designers may also be why some celebrities have chosen to call this place home as they are confident their spaces are well-designed.

Riverhouse is located right by the Hudson Rivers so their apartment spaces feature beautiful river views. The building includes a 24-hour doorman and concierge service, 50-foot indoor pool, fitness center, media cafe, billiards room, and a landscaped terrace. Additionally, it has on-site parking with access to it from inside the building. Even better, it’s an eco-friendly building with a LEED Gold certification, which may be why it attracted the environmentally conscious Leonardo DiCaprio.

This West Village apartment building is another celebrity magnet and it’s residences include American actor Ben Stiller, singer-songwriter Jon Bon Jovi, and Russian model Irina Shayk. 150 Charles Street was built in 2015 and is 16 stories tall with 92 units in total. The building’s spaces were a hot commodity back when sales were launched in 2013 that it took only 12 weeks for all the 92 spaces to sell out.

70 Vestry Street apartment building has two notable sports names in residence: NFL Tom Brady and his supermodel wife Gisele Bundchen and Formula One racing driver Lewis Hamilton. This waterfront building has 46 units and was built in 2018. While the building is located in a flood zone, which may require flood insurance purchase, it’s in a neighborhood with slightly below average crime rates. Additionally, it’s also near a historic district which means there are fewer restrictions in terms of development and homes near historic districts can potentially have 12% higher home values than those further away.

This Tribeca apartment building was designed by the famous Robert A. M. Stern Architects and features beautiful panoramic views of the Hudson River. It features an 82-foot pool, fitness centers with yoga studios, a squash court, children’s playroom, billiards room, and lounge. A few perks that have probably attracted celebrities to make this building their home are the amenities that offer a level of privacy. This includes a private parking garage, a gated private courtyard, and security at both the courtyard and via the 24-hour concierge.

If this particular building has caught your interest, there are a few units available for sale on the market currently:

This Upper West Side apartment building was built in 1884 and is an iconic feature in history as it was designated a New York City Landmark in 1969 and a National Historic Landmark in 1976.. This building has been a hotspot living space for many celebrities and still is today! There are many notable residents including John Lennon, Lauren Bacall, Rosemary Clooney, Judy Garland, and Leonard Bernstein. In fact, The Dakota is known for being one of the hardest co-ops to get into as many celebrities have applied and been rejected by the building’s board.

Of the 94 units in this 9 story building, there are currently 5 available listings on the market. While it may be difficult and almost impossible to get into this building, there’s nothing like checking out the beautiful spaces virtually.

Whether you want to purchase your own dream luxury apartment in New York City or just want to take a peek inside celebrity homes to get a taste of living in their shoes, there’s nothing like digitally and virtually exploring these beautiful residential spaces in NYC! Happy apartment browsing and we hope you’ll find your dream apartment with Localize. 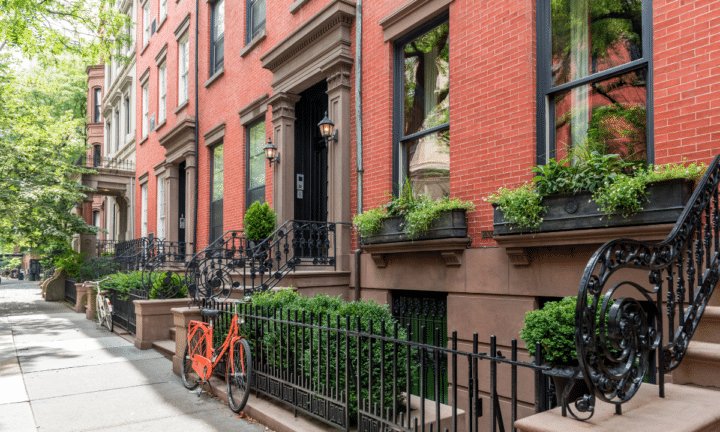