Things I Wish I Knew Before Moving In: What it’s like living above a noisy bar or nightclub

Susan Malcolm left Westchester for an apartment on the Upper West Side nine years ago, after her kids had grown. She hadn’t realized there was a live music venue in the building’s basement. Initially, when she was bothered the West End Lounge’s noise, the ex-suburbanite thought she was being overly sensitive.

Two months in, however, Malcolm realized the noise level was beyond reasonable. She has now suffered through it for nearly a decade.

The West End Lounge, at 955 West End Ave., at the corner of West 107th Street, is the No. 2 noisiest bar or nightclub in the city, according to an analysis by Localize.city. The website provides insights about every address in New York City, including whether noise from nearby bars is a problem. Localize.city provides information about noisy bars and clubs to help buyers and renters understand what’s happening at a particular address before moving in so they don’t regret the decision after it’s too late.

“The throbbing of the music and the street noise of the clientele keep me up,” Malcolm said. “If the weather is at all decent, from 6 p.m. onward, there’s a full party out on the street. They are out until 4 in the morning.”

Malcolm estimates she has complained to the city about 30 times over the past five years about the West End Lounge.  Whenever she’s gone downstairs to complain directly, she’s told the manager isn’t working that night. 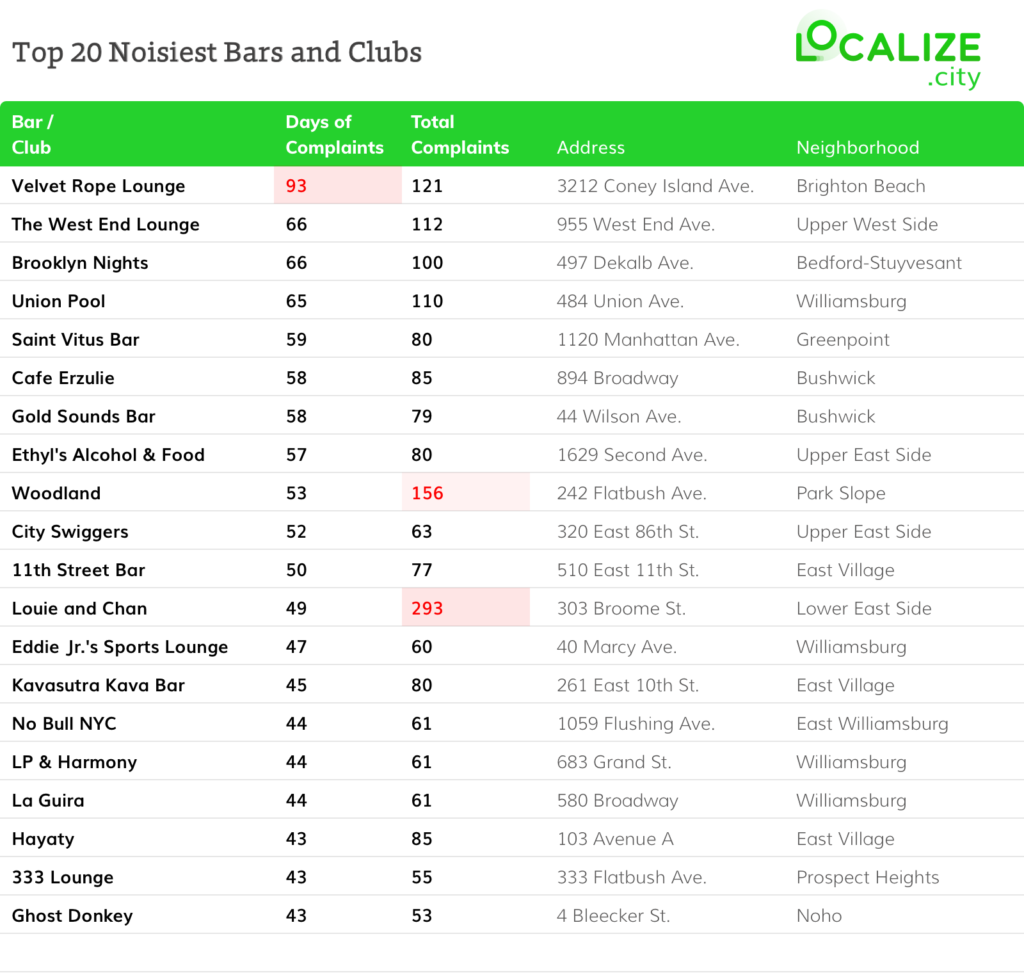 Localize.city’s data science team created an algorithm to look for hot spots of repeated 311 noise complaints between June 15, 2017 to June 15, 2018, and matched these spots to nearby places like bars and nightclubs.

The aim was to detect persistent problems, rather than particularly high peaks taking place on a few days  (since multiple complaints might be filed on one day). That is why hot spots are ranked by the number of days where complaints were filed as opposed to the total number of complaints.

The No. 1 spot for noise complaints by days was the Velvet Rope Lounge, a thumping Brighton Beach nightclub with karaoke, hookah pipes and icy vodka shots. It ranked third for total complaints overall, following Louie and Chan on the Lower East Side and Park Slope’s Woodland.

“Damn, I will admit it is loud in here, and will set off a good case of tinnitus,” a Yelp reviewer wrote about Saint Vitus.

On the neighborhood level, Williamsburg had the greatest number of noisy bars and nightclubs in the top 20, followed by the East Village, Bushwick and the Upper East Side.

Localize.city’s algorithm also looked for notable patterns, trying to detect whether specific places tend to be problematic during certain hours or days of the week.

For instance, two bars were most problematic during week nights when noise typically is at a minimum. The Gaf West, a Hell’s Kitchen Irish pub on West 48th Street, and Bushwick’s Alphaville, a hip live music venue on Wilson Avenue, saw twice as many complaints on Mondays and Tuesdays than other days of the week, Localize.city found.

Two bars were particularly noisy for neighbors in the wee hours of the morning. The Lower East Side’s famously gritty 169 Bar, on East Broadway, and Mott Haven’s sports bar, Oze Tavern on East 138th Street, had the most complaints after 4 a.m.

At the West End Lounge, for example, Wednesday night karaoke has been particularly grating, for residents like Malcolm. Indeed, Localize.city found that complaints were highest on Wednesday, as well as Saturday nights. Generally, neighbors logged the most calls between 11 p.m. to 2 a.m.

Tenants are finally now banding together to fight the lounge, Malcolm said. The New York State Liquor Authority is investigating its license, given based on the assumption that it would operate as a coffee shop, not a live music venue.

What Brokers Won’t Tell You

When you go to an open house, you might not even notice there’s potentially noisy bar nearby.

“Noise from bars and clubs is a nuisance many New Yorkers have said they wish they knew about before choosing their home” said Localize.city president Steve Kalifowitz. “By knowing the full story of every home, including its noise profile, we’re helping New Yorkers make better, more informed decisions about where to live. Some will see noisy clubs and bars as a sign of a fun spot. Others will run away. But few will be caught by surprise.”

Malcolm has considered moving because of the noise, but prefers to stay put. Now, Malcolm hopes to use the noise as leverage as she renegotiates her lease. She plans to tell her landlord, “Our quality of life has been really negatively impacted by your tenant.”

What’s more, an apartment on her floor is about to hit the market. But Malcolm noted, “You can be sure the broker who manages the building is not going to tell the tenant, ‘By the way, there’s a bar directly below you.’”

By including information about issues like noisy bars, Localize.city aims to play a role of a trusted insider, revealing the hidden story of every address. The site provides information at your fingertips, whether you are ready to move or are figuring out how to make your current home more livable.