Sun-drenched or sun-starved? Know how much light a building gets

When Melissa Kinski moved into her Lower East Side apartment nearly 25 years ago, she faced a backyard dotted with trees. Her apartment was speckled with sun coming through the leaves during the day. That changed when a 26-story L-shaped hotel went up around her five-story tenement.

“I would keep basil, rosemary, mint, a bunch of little herbs on my sill. I would get them in Spring and could keep them until December,” said Kinski. “The loss of light makes me unhappy, but I’ve done things to make it work. I put mirrors up to reflect light back in. It’s something.”

Kinski doesn’t plan to move. In fact, she’s the last remaining rent-stabilized tenant in her Ludlow Street building. But new tenants, who can expect to pay three times as much to live in the building’s renovated apartments, may not realize how dark it can be over the course of the day.

Having good sunlight at home is often a “must-have” for New Yorkers, yet it’s one of the most difficult things to verify. You can’t tell just by browsing apartments online. You have to make the time and effort to visit every home to know for sure. And even if you visit on a summer day, you can’t know what it will be like in the winter.

Localize has solved this problem.

Search an address and Localize will describe the sunlight on every side of the building, throughout the year. The descriptions include the number of hours in the day when it will be brightest, along with how different floors are affected by shadows cast from surrounding buildings.

Many New Yorkers wind up regretting their apartment choice after realizing it gets less sunlight than they expected. To remedy this, Localize’s team of  data scientists and GIS experts created an algorithmic model of New York City that analyzes the amount and quality of sunlight you can expect in your home. It’s the first analysis of its kind to be released freely to the public. 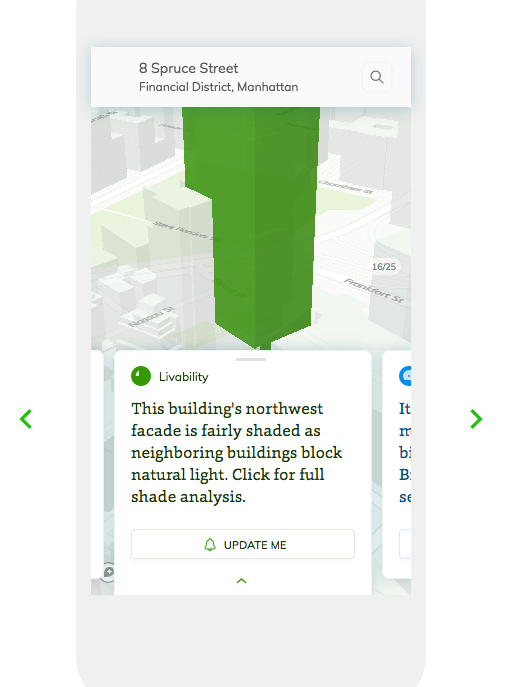 How Localize.city analyzed shade for every building

Localize calculated the azimuth (arc of horizon) of every outward-facing facade in New York City to determine how much direct sunlight exposure there was throughout the year. To do this, data scientists and GIS experts took complex, three-dimensional out-facing geometrical shapes of every building in New York City and measured the amount of sunlight exposure they could potentially receive.

To simulate the shading over the walls of the entire city, Localize used detailed three-dimensional building models of the five boroughs. The team overlaid a shadow map on an area and recorded whether a three-dimensional location on a wall was inside a shaded area or not. Those measurements were aggregated for each point in space and time. This enabled the team to analyze the amount of direct sunlight that is blocked by shadows cast from neighboring structures.

Why knowing more about your quality of light matters

Different people covet different kinds of exposures for a variety of reasons. Understanding how sunlight affects a space throughout the day and year gives a fuller picture of what it’s like to inhabit the space.

House hunters often put a premium on southern exposures since they get a good amount of direct sunlight year-round. But sometimes south-facing rooms can be too bright and too hot in the summer.  On the flip side, some New Yorkers prefer to avoid north-facing exposures since they tend to receive the least direct sunlight, especially in winter. Others prefer this kind of light, saying it feels calm, and it might be easier to keep a north-facing room cool, which is a plus in the summer.

Localize identified the direction that each street runs and the orientation of their buildings relative to that orientation. At every address you search, you will find a general assessment of what it means to live on that street, given its orientation.

Street grid orientation has a significant impact on the times of day a street will be shaded or sunny. It also affects how much sun the buildings on a particular street tend to receive and when they get it. The orientation of a street, and more importantly, the street grid itself, often determine the amount and the time a neighborhood receives sunlight. After all, the walk to and from your home can affect your mood as well as the feel of your neighborhood.

Streets that run north/south receive a good amount of sunshine during winter days. In summer they are shaded in the morning and afternoon, though tend to feel the intensity of a strong sun at noon. East/west-running streets tend to be shaded during the day. That makes them dark and cold in the winter, but cooler in the summer.

Ready to find your own sun-drenched home in NYC? Let Localize jumpstart your homebuying journey today.

Datasets and libraries used in this analysis: