Puddles or Small Ponds? Where New Yorkers Feel Most Deluged by Street Flooding

It’s a familiar scene during or after big rainstorms in many parts of New York City: pedestrians forced to leap across massive puddles pooling at crosswalks, or drivers skidding through what seem like small ponds.

There were 3,141 complaints about street flooding over 12 months, according to Localize.city’s analysis of 311 data from Oct. 1, 2017, through Sept. 30, 2018. That was 53 percent higher than the number of complaints during the same time frame four years before. The analysis also looked at specific addresses where complaints were highest, as well as neighborhoods with the most complaints.

“The question remains: Is the rise in street flooding complaints attributed to more people complaining about the issue or worsening conditions from more frequent storms? In general, the total number of flooding complains is correlated with rainfall, and 2018 has been a rainy year,” said Localize.city urban planner Olivia Jovine, who wrote “Disaster Preparedness NYC.” “Flooding is a real issue. During a recent thunderstorm, for instance, the Bronx River overflowed onto surrounding streets causing roadway closures.”

“New York City can expect an uptick in storm events that strain the city’s infrastructure; and with rising sea levels, storm impacts will be exacerbated over the long term,” Jovine said. “Many streets get flooded because the runoff can’t be absorbed. Heavy rainfall often causes sewers to back up into people’s homes, or flow into the city’s rivers and bays, as polluted stormwater or untreated sewage gushes directly into the waterways before reaching sewage treatment facilities.”

Midland Beach was one of the areas hardest hit by Hurricane Sandy nearly six years ago. Eleven people reportedly died in or near their homes in the suburban-like Staten Island neighborhood.

Flooding continues to be a problem there. The neighborhood ranks among the highest for complaints about street flooding. One block in particular — Grimsby Street at Mapleton Avenue — is one of the city’s biggest hot spots for complaints, according to the analysis.

“The normal now is that after any rain there is a flood. It’s really bad,” Midland Beach resident and advocate Aiman Youssef told Localize.city. A couple of years ago, he hung up a faux tourism sign at the intersection of Grimsby and Mapleton reading, “Welcome to Grimsby Lake. New all-season resort in our neighborhood.”

“Many people are suffering on that block because of the stale water,” Youssef said. “They can’t come out of their garages. They’re stuck.” 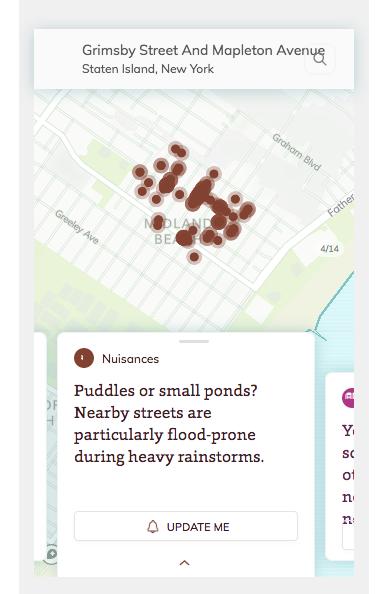 Here are the top addresses/intersections for street flooding complaints in the past year (with the number of complaints from Oct. 1, 2017 – Sept. 30, 2018)

The analysis looked at the number of complaints based on the square mileage of a neighborhood to even the playing field since some neighborhoods are much bigger than others. Only neighborhoods that had more than 10 complaints between October 2017 and September 2018 were included.

Staten Island dominated the list with seven neighborhoods on the top 10, including the No. 2 spot, Midland Beach, which saw 60 complaints over 12 months.

“There is a corridor of especially problematic areas more or less along the city’s southern coastal areas in Staten Island and southeast Queens,” said Localize.city data scientist Michal Eisenberg.

Many of these areas are expected to get upgrades — eventually.

Midland Beach, for instance, is expected to get some relief through the $25 million Mid-Island Bluebelt Drainage plan. As part of that project, the problematic Grimsby Street will likely be elevated. The project, however, is still in the design phase. That is expected to wrap up next month, and construction will not likely be complete until at least 2022. In the meantime, City Councilman Steven Matteo funded a custom pump for the block to help with the flooding there.

Tottenville, which continues to see flooding, especially around 532 Craig Ave., is hoping to protect itself from future storms through a project called “Living Breakwaters,” which will build a barrier containing an oyster reef to protect the area. As the oysters reproduce, the barrier will grow and provide even more protection, according to the design by Kate Orff, the first landscape architect to win a Macarthur “genius” grant. But as the project’s design is refined, some areas of the neighborhood are clearly continuing to see problems during rainstorms.

In parts of the Rockaways — including around Beach 84th Street — the city plans to reconstruct storm drains and sewers. The city is still repairing damaged streets — rehabilitating sidewalks, re-doing pavement and improving water mains — to prevent roads from washing away in future storms. Much of the work in the Rockaways, however, will take at least a decade to complete, as the plan to improve housing and streets in Edgemere or replace a seawall at Beach 88th Street Park. Some of the proposed plans, like protecting Breezy Point from flooding, do not yet have all of the funding in place.

Flooding on Manhattan’s West Side and the Bronx

Three areas on Manhattan’s West Side — Midtown South, Chelsea and the Upper West Side — made the list.

The streets of Marble Hill, a small neighborhood along the Hudson River — with a Manhattan ZIP code even though it’s attached to the Bronx — ranked first, with about 143 complaints per square mile. But the neighborhood’s small size — it is 0.11 square miles — skewed the rate. Overall, the area had 16 complaints about street flooding in the past year.

Pelham Gardens, which is near the Hutchinson River, was the one neighborhood in the Bronx to make the top 20.

In Brooklyn, many people complain about street flooding in the inland areas of Borough Park and nearby Flatbush, as well as Gowanus, where the heavily polluted canal is known to cause problems around nearby streets.

Understand if flooding is a problem in your area

When you search any address on Localize.city, the platform will tell you if an area’s streets are particularly flood-prone during heavy rainstorms. The insight appears for any address where there have been higher than average numbers of 311 complaints about sewer issues like overflowing drains and roadway flooding within half a mile during the past two years.

Additionally, for users who sign up for updates, Localize.city lets you know if there’s an upcoming storm predicted to cause flooding near your home (or the home you’re thinking of moving to).