Lower East Side Watch: 12 Must-Knows About the Changing Neighborhood

The Lower East Side’s pace of change is rapidly accelerating — and it’s causing some growing pains.

To get a big-picture view of the area’s transformation and help people eyeing a move in (or out) of the neighborhood, Localize.city — a real estate website that shows the pros and cons of every address — offers an in-depth look at the Lower East Side.

“The Lower East Side’s landscape is changing dramatically. Once dominated by tenements, boxy brick co-ops and public housing, the area is getting a makeover with big, glass skyscrapers and high-end boutique condos. Mom-and-pops are making way for chains like Target and Trader Joe’s,” said Localize.city, urban planner Alon Goldstein. “The new projects and amenities are attracting thousands of new people to the area, but long-time residents are worried about potential strains on infrastructure and possible displacement from an upward push on pricing.”

Local activists and elected officials, for instance, are challenging City Planning’s approval of plans to build massive towers along the waterfront area known as Two Bridges. There’s already one huge tower there — One Manhattan South — and adding four more massive skyscrapers, ranging from 62 to 80 stories, would significantly alter the area’s skyline.

Here’s what you should know about new residential development, as well infrastructure and other upgrades, according to the Localize.city team of data scientists and urban planners.

The Lower East Side is the No. 1 neighborhood in Manhattan for new units expected to open by 2020. There are roughly 1,088 units in four buildings expected to open in the next year or so. That means if you move there, you may end up living near a construction site — or perhaps moving into one since several of the new projects are part of multi-phase, multi-year projects. 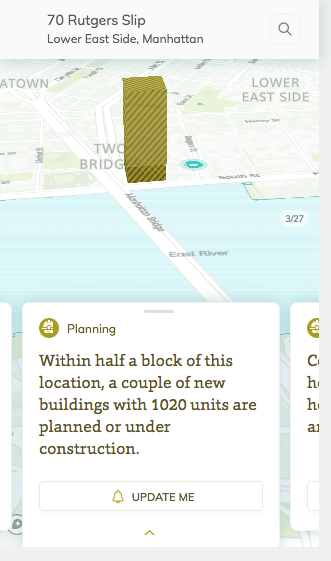 Led by Manhattan Square South, the LES was the top Manhattan neighborhood for new units expected by 2020, according to an analysis by Localize.city of buildings under construction for more than two years as of Oct. 10, 2018. The 72-story One Manhattan Square is bringing 815 units to the waterfront near the Manhattan Bridge, at the southern edge of the Two Bridges area. It is the borough’s largest project expected to open in 2019. (The building got a temporary certificate of occupancy in November 2018).

A building on Delancey Street that is part of the massive $1 billion Essex Crossing complex is also expected to open in 2019, bringing 195 units to the area. When the complex is complete — which is expected around 2024 — roughly 2,000 new residents will be spread across nine apartment and condo buildings.

The neighborhood is still in the top 20 citywide for new development expected to open beyond 2020, when taking into account the number of units approved with the past year. Nearly 600 units were authorized by the Department of Buildings, Localize.city found. (In Manhattan, only East Harlem, which was recently rezoned, had more authorized units. But that might change with the proposed Two Bridges projects.)

And even more might be in the pipeline. The Two Bridges project would bring another 2,775 units to the area.

Developers are looking to transform the area along the East River between the Manhattan and Williamsburg bridges, near a waterfront sanitation facility. The proposal for four new skyscrapers includes one that, at around 1,000 feet, would be the tallest building between Midtown and Downtown.

When it comes to sunlight, Lower East Side buildings are among the sunniest in Manhattan, according to an analysis from Localize.city. That’s because a lot of the neighborhood is still fairly low-scale and high-rises are fairly spread out. The area ranked No. 8 on Localize.city’s list of sunniest Manhattan neighborhoods.

But shadows from the proposed Two Bridges towers might block the sun for many existing residents. The planned towers would be up to three times the height of nearby existing buildings. Those glassy towers may get great direct light while residents of two public housing complexes (Rutgers, and LaGuardia houses) and an affordable housing complex (Lands End II) would be most affected, with blocked southern views and large shadows cast over those developments. Residents further inland made also find their south-facing views partially blocked.

4. With so many new residents in the area, you might see more strain on transit, schools and other infrastructure.

Many have expressed concern that thousands of new residents will constrain local schools and public transportation and displace long-time residents and businesses.

With the massive Two Bridges plan, for instance, many have complained that the developers for these projects are not required to go through the city’s complex uniform land use review procedure (ULURP). The community feels excluded from the process and worries that their worries about potential impacts will go unheeded. The developers, however, have reportedly pledged $55 million toward transit and open space upgrades.

5. Many streets in the area are already dangerous for pedestrians and cyclists. 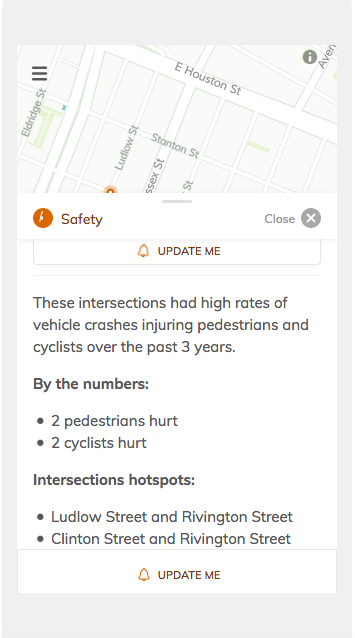 6. Several Lower East Side schools are near the city’s most dangerous intersections.

Families should be aware that the walk to school could be dangerous. For instance, the Great Oaks Charter School, at 38 Delancey St., was No. 2 on a Localize.city list of city schools with the most pedestrians and cyclists hit within 500 feet between. Also on the list was the building shared by Marta Valle High School, the School for Global Leaders and Lower East Side Prep, as well as P.S. 140 and P.S. 142, which shares space with the Manhattan Charter School.

7. Despite the high number of crashes, the area is a cyclist haven.

Compared to other parts of the city, the Lower East Side has extensive bike lanes, Citibike access and a large number of bike commuters.

8. Even a partial L train shutdown, along with new residential construction, could make traffic a nightmare.

Even if the L train is not shut down entirely for 15 months, a shutdown on nights and weekends could have an impact on the Lower East Side, which is a nightlife hub. You could, for instance, expect more cars and cyclists on nights and weekends — when traffic around the Williamsburg Bridge is already problematic.

At the same time, the Essex Crossing Project is expected to increase vehicular traffic in the area, mainly at intersections along Delancey. There may also be increased crowding on local buses, the M9 and M14A, during rush hour.

Concerns remain about future flooding. Much of the new construction is in the flood zone.

A flood-proofing plan to help protect waterfront neighborhoods from storm surges and sea level rise calls for elevating parkland and adding new flood walls as well as planting more absorbent greenery near the river. The project will not completely protect the area, but it should provide residents with more assurance that buildings and streets won’t be completely decimated during the next big storm.

Construction is expected to start in 2019 and will likely entail years of construction-related work, potentially making living in the area more challenging in the short-term.

Delancey Street is turning into a new hub of dining, shopping and entertainment. In 2019, a new, much larger Essex Street Market will replace the old one across the street. It will host more than 40 upscale food and craft vendors, including Smorgasburg and a beer garden. Already, the area has a new Target, Trader Joe’s and Regal Cinemas.

Essex Crossing is also creating 15,000 square foot plaza with trees, a community table area and a playground along Broome Street. It is also planning a publicly accessible rooftop farm over the Essex Street Market.

The proposed Lowline park below Delancey, in the historic and abandoned Williamsburg Bridge Trolley Terminal, would provide a new open space amenity for the neighborhood and likely become a major tourist attraction.

Nearby, the city is renovating the three-acre Seward Park to make it more accessible and is adding more plants and seating. It is also turning the deteriorating asphalt corridor in front of the Seward Park Library into a more inviting community space with a grassy lawn and amphitheater.

Around the Two Bridges area, the city is building a new eight-acre park with lawns, promenades, and play areas will allow residents to walk to the East River. The park will replace an abandoned warehouse, parking lot and temporary pop up park.

The area’s bars are often hopping, much to the dismay of nearby residents. The Broome Street bar Louie and Chan had the city’s fourth highest number of 311 complaints about bar noise, according to a Localize.city analysis of 311 data from June 15, 2017 to June 15, 2018 that matched complaint hot spots to nearby bars and nightclubs.

The area has the fourth-highest rate of home mouse and rat sightings in the borough, but the city is trying to help.

The Lower East Side was one of a few neighborhoods targeted by a 2017 city initiative to address the issue. Rather than just poisoning the rodents, the rat  initiative focuses on implementing more frequent trash pickups along with installing enclosed trash bins in parks and on streets. In public housing complexes, basements with dirt floors will be sealed off with cement to limit movement of rats into buildings. 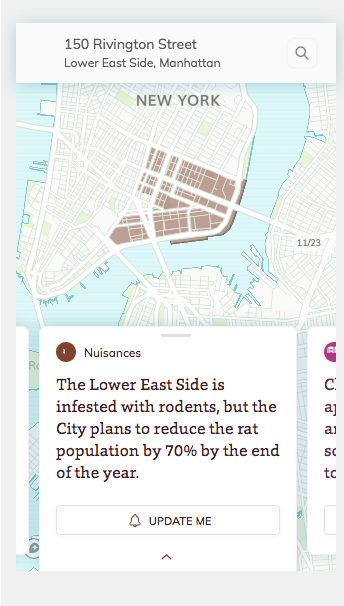 When you visit Localize.city and type in any address for the Lower East Side, you will see exactly what new construction projects are happening nearby, which particular dangerous intersections are outside your door and any other of the new parks or other amenities are on the horizon.

>> Want to know more about where you live or are looking to live? Check out Localize.city.