With Amazon tapping Long Island City for part of its HQ2 site, the booming waterfront Queens neighborhood is under the spotlight.

Localize.city, a real estate knowledge platform that creates dozens of insights for every New York City address, took a look at what’s been in the works for the area’s residential development, as well as the transportation landscape.

“When Amazon moves part of its second headquarters to Long Island City, it will have a tremendous impact on the neighborhood and others nearby,” said Localize.city urban planner Stephen Albonesi. “But if any area in New York is poised for a major influx in residents, it’s Long Island City, where a building boom is already remaking much of the area and where residents have been grappling with how to meet the demands of thousands of new people.”

New units are opening at a clip right now in the neighborhood. Roughly 3,000 units were completed in the first half of 2018, and another 3,300 units are expected to hit the market between now and 2020, according to a Localize.city analysis of Department of Building data. That represented 20 percent of all of the new units (with at least 4 units) expected to be built by 2020, Localize.city data scientists noted.

Looking beyond 2020: The neighborhood will remain the No. 1 area for construction.  Another 1,500 units are in the pipeline, based on permits filed within the past 12 months, and another wave is expected: permits have been filed — but not yet approved — for at least 2,600 more units, Localize.city found. 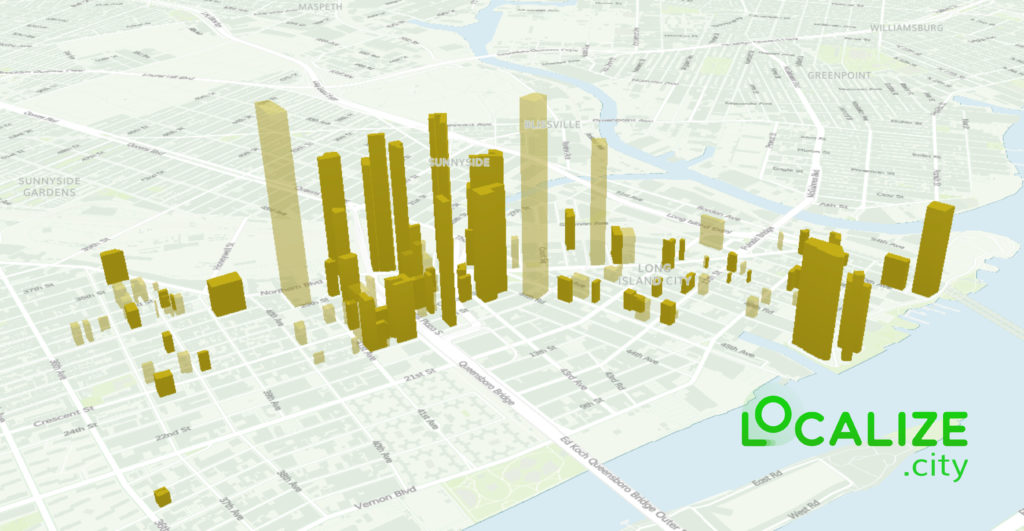 The above map shows new construction of residential development of buildings with four or more units in LIC from Jan. 1, 2008 to July 1, 2018. The buildings in dark gold have already been completed. The translucent ones are under construction. (This does not include buildings with permits that have not yet been approved.)

Nearly 2,000 new apartments currently under construction are in the city’s 100-year-flood zone, which means there’s a 1 percent risk of a flood event each year, according to a Localize.city analysis of flood-prone areas based on FEMA’s 2015 Preliminary Flood Insurance Rate Map and Department of Buildings permit data.

The creek, once the city’s epicenter for petroleum refining, left behind a legacy of pesticides, metals and other toxins. Thousands of residents are moving in near the contaminated waterway before it’s cleaned up. Making matters worse, much of the area’s waterfront is at high risk of flooding during major storms. So, the combination of major flood risk and polluted waters could mean toxic sludge flowing into streets and homes during the next major storm.

The neighborhood would be six times bigger than Manhattan’s Hudson Yards, with up to 24,000 units of housing, 52 acres of parks, 19 schools and more than 1 million square feet of retail and office space, officials have said. It would take at least a decade to build and would better connect Astoria, Long Island City and Sunnyside.

The rezoning could transform the areas along Northern Boulevard, Jackson Avenue and 41st Avenue, where industrial buildings, self-storage units and parking lots would make way for mixed-use towers.

Groceries and pharmacies are still scarce, and publicly accessible gyms may be in short supply because they’re included as amenities within many private developments. But more retail is on the horizon: roughly 500,000 square feet is expected by the early 2020’s. Much of it may skew toward chain stores, large grocers and movie theaters.

The area saw more than 4,000 parking-related complaints in one year, according to a May analysis from Localize.city.

The area, a commercial and industrial hub where a major construction boom is underway, also saw the largest increase of parking-related complaints over five years.

Long Island City ranked No. 9 in terms of areas where people are filing 311 complaints about parking placard abuse, according to a Localize.city report. When drivers with placards block crosswalks, fire hydrants or bike lanes, they potentially endanger public safety. The fact that people in LIC have been complaining about it more than in other parts of the city again shows how parking issues are especially problematic in the area.

Cycling is popular in the area, which has more than 40 Citibike stations. But vehicles don’t necessarily respect bike lanes here.

Sections of 11th Street are getting protected bike lanes as the roadway shrinks from four to two lanes. Parts of 48th and 49th Avenues will also get two-way protected bike lanes. Loading docks and parking areas are being replaced in the waterfront area with new trees, benches and expanded sidewalks.

One of the most dangerous streets in Western Queens, 21st Street, is also getting safety upgrades to make it more pedestrian-friendly. Between 2009 and 2016, five pedestrians and one cyclist were killed on this four-lane truck route connecting the Queens-Midtown Tunnel and RFK/Triborough Bridge.

The 7 line is one of the first to get a new signal system, and residents along the line had been promised new signals and fully restored service by November. But the timeline has been pushed back before and could be pushed back again. The new signals will allow for at least two additional trains to run on this line every hour.

The much-maligned G train is getting additional train cars and more frequent service between April 2019 and June 2020 during the L train shutdown. But many residents are wondering whether the MTA will restore G train service to Forest Hills instead of stopping at Court Square.

There may be an SBS route along or near the existing Q66 bus route, between Flushing and Long Island City. But it may be years away, officials have said.

If built, it would run along 21st Street and Vernon Boulevard as part of an 11-mile stretch from Astoria to Gowanus. But it wouldn’t be completed until at least 2029, according to officials.

10 things you must know about NYC before moving there

Renters’ guide: how to always get your security deposit back