When families are planning to move, the No. 1 question is often, “What are the public schools like?”

It’s not easy to find out.

That’s why Localize.city does the research for you, offering a clear and accessible, yet nuanced look at all of the closest schools near a particular address.

For any address you look up, Localize.city gives you the lowdown on local schools, looking at student performance, school leadership, teaching quality and the kind of school environment its community has created. Do teachers like working at their schools? Is there a lot of trust and respect among teachers, administrators and families? Is the curriculum strong?

“The amount of information about schools can be overwhelming for families when they’re conducting their real estate searches,” said Steve Kalifowitz, Localize.city president. “Our team of data scientists and urban planners analyzed Department of Education metrics to provide information that’s clear, accessible and provides a deep knowledge about schools near every address.”

> Thinking of moving? Visit Localize.city to see what’s happening at the local schools

A brief primer on the kindergarten admissions process

In New York City, all families have to submit an application to get a kindergarten seat, and you can rank up to 12 programs in order of preference. Applications for traditional public schools are due Jan. 14; the deadline for charters is Apr. 1.

While your neighborhood, or “zoned,” school offers almost guaranteed admission to children who live within the zone, you still have to submit an application to get in. (Some overcrowded zoned schools end up with waitlists for students living within their zone.) Many families opt to send their kids to schools they are not “zoned” for, which means your address does not necessarily define where your kids attend school. Roughly 40 percent of kindergarteners do not go to the “zoned” school for their address, and instead travel to other schools, according to a report from the Center for New York City Affairs at the New School.

To help you understand the landscape of public schools near a particular home, Localize.city shows you not only the neighborhood school that an address is zoned for, but also shows you other nearby traditional public and charter elementary schools — and how they compare to one another. Moreover, the platform shows the routes to all of these schools and how long it takes to walk to them. (Among its many other insights for every address, Localize.city flags if there are dangerous intersections nearby, so you’ll know if the walk to school could be dicey. It also tells you about new schools coming, so you’ll know if the schools landscape may soon change.)

Student achievement data, which accounted for half the score, incorporates DOE data on state test results (including student growth and performance), as well as how students performed on core courses and how prepared they are for middle school.

Another 25 percent of the score looked at school leadership and teaching (including whether parents and teachers feel their administrators are effective leaders, whether teachers would recommend the school to others and how the curriculum fares).

The remaining 25 percent looked at the school environment (including whether parents and teachers feel like they’re partners at the school, whether students feel safe and supported and whether there’s a culture of trust and respect among the teachers, administrators and families). 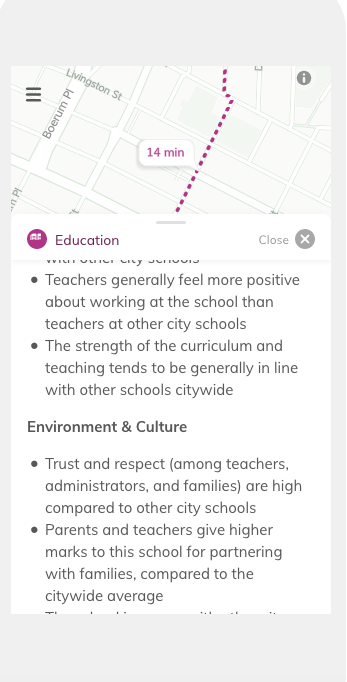 Signs of a good school


By checking Localize.city to see how nearby schools compare to one another, you can make your shortlist based on the metrics that matter most to you.

It is still important to visit schools in person, if you’re able, so you can experience the vibe firsthand. To help you know what to look for, Localize.city talked with Susan Felder, principal of Gramercy’s P.S. 40, which is one of the top elementary schools in the city. She recently spent a year doing a prestigious coaching fellowship where she mentored first-year principals across the city.

Here’s what she suggested families look for:

> Strong teaching. At the elementary school level, you don’t want to see a teacher spending too much time giving lectures at the front of the classroom. At P.S. 40, sometimes you can’t immediately see the teacher because they are crouched down on the floor leading a small group or working one-on-one with a student — and that’s a good thing, according to Felder. Teachers often do a mini-lesson before the kids break up into smaller groups.

> Engaged kids. It’s not about simply having quiet children, but having engaged children. P.S. 40 focuses a lot on something called “turn and talk,” which means that instead of one student answering a question in front of the whole class, the kids all do the work and turn and talk to one another to share their answers. “It increases participation,” Felder said.

> A “kid-friendly” environment. Schools should reflect the work of their students in the classroom and in the hallways. At P.S. 40, the halls and classrooms are filled with student work and art, giving kids a sense of ownership over their work, Felder believes.