Localize.city uncovered areas in 12 neighborhoods where pedestrians or cyclists are three times more likely to be injured or killed in a crash. A pattern emerged among these hot spots: Crashes often occur near elevated tracks or bridges and their approaches.

Localize.city, a website that provides insights for every New York City address, looks at street safety to give buyers and renters a holistic picture of what’s happening at particular addresses so they can make more informed decisions before moving.

This analysis focuses on where there are residential buildings surrounded by intersections that, overall, are significantly more dangerous than elsewhere.

“Buildings in these dangerous ‘clusters’ saw about 238 crashes, on average, in their nearby intersections where pedestrians or cyclists were injured in the past five years,” said Localize.city data scientist Israel Schwartz. “That compares to the citywide average of 75.”

The data science team evaluated street safety at every New York City intersection from January 1, 2013 to January 1, 2018. The analysis created an index that weighted one-, two- and multi-lane streets differently to avoid a bias toward streets with more traffic. It then pinpointed residential buildings located within 500 feet of the most dangerous intersections and mapped out the biggest clusters of such buildings.

“Breaking the analysis down by different street types helps us understand how dangerous each intersection is relative to its size and volume of traffic,” said Localize.city urban planner Andrew Lassiter. “This may give you a truer sense of how safe it is to cross a given street than just using raw numbers alone.”

Intersections near bridges or under elevated tracks — where sight lines might be blocked as many modes of transportation converge— tend to be the diciest.

“Around major bridges in New York City, you have heavy vehicle, bike, and pedestrian traffic all cramming into a narrow corridor, increasing the risk of crashes. This is exacerbated in places like Williamsburg and the Lower East Side, where many vehicles find their way to the bridge through busy residential neighborhoods,” Lassiter said.  “And in neighborhoods with elevated subway or LIRR tracks, the streets below the tracks can be pretty chaotic. Visibility is tough with so many support posts, and the layout of the street can make drivers’ actions unpredictable.”

Pedestrian Fatalities for Many New Yorkers Hit Close to Home

Children and elderly pedestrians tend to be struck close to home, according to a 2017 New York City Health Department report. Nearly three-quarters of child pedestrian fatalities and more than half of fatalities of older adults occurred within 10 blocks of home — perhaps unsurprising given that young and old tend to stay closer to home. On the other hand, about 35 percent of pedestrians aged between 18 and 64 years old are struck and killed within 10 blocks of home.

The city is working on making its streets safer through Vision Zero, which the de Blasio administration launched in 2014 to reduce traffic fatalities. Last year saw the fewest traffic fatalities on record, driven by a 32 percent drop in pedestrian fatalities.

Indeed, most of the dozen areas identified in the Localize.city analysis have gotten, or are getting, some form of pedestrian safety upgrades by the City’s Department of Transportation (DOT). But some neighborhoods feel like they’re not getting traffic-calming measures soon enough.

Advocates are hopeful that uncovering these 12 areas will help direct more attention to improving them.

“We know how to prevent death and serious injury on our streets, and with this study, we also have a better understanding of where the City should target investments in safer street redesigns,” said Paul Steely White, executive director of Transportation Alternatives. “Traffic deaths are falling in New York thanks to the City’s data-driven approach to street safety. Thanks to this critical research, we can further reduce the threat to pedestrians and bicyclists at the intersections where help is needed most.”

Below is a snapshot of what’s happening at four of the hot spots identified by Localize.city. 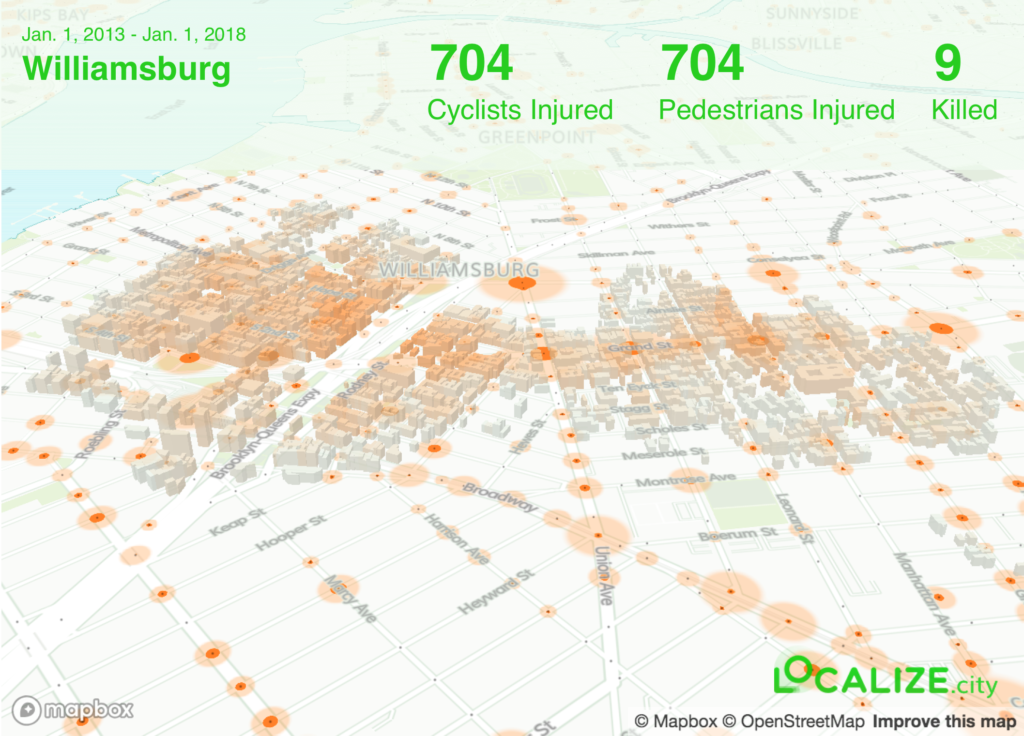 Upgrades Near Bridge in Williamsburg, But Concerns Remain

This area around the bridge on the South Side of Williamsburg was the only area among the 12 where crashes injuring cyclists were similar to those injuring pedestrians — indicating how much bike traffic has increased in the area in the past several years.

“Access to the bridge is confusing and dangerous, and as a result cyclists and pedestrians have suffered dozens of injuries and one fatality near the bridge entrance since 2013,” Lassiter said. “With the L train shutdown looming in 2019, the number of pedestrians, drivers, and cyclists trying to use the bridge will only go up.”

Though the city recently made some safety upgrades here, it’s planning more changes in advance of the L train tunnel closure.

“New bike lanes and pedestrian safety improvements on streets leading to the foot of the Williamsburg Bridge in Brooklyn should help relieve some of the crunch and keep the area from getting too dangerous over the next couple of years,” he added. 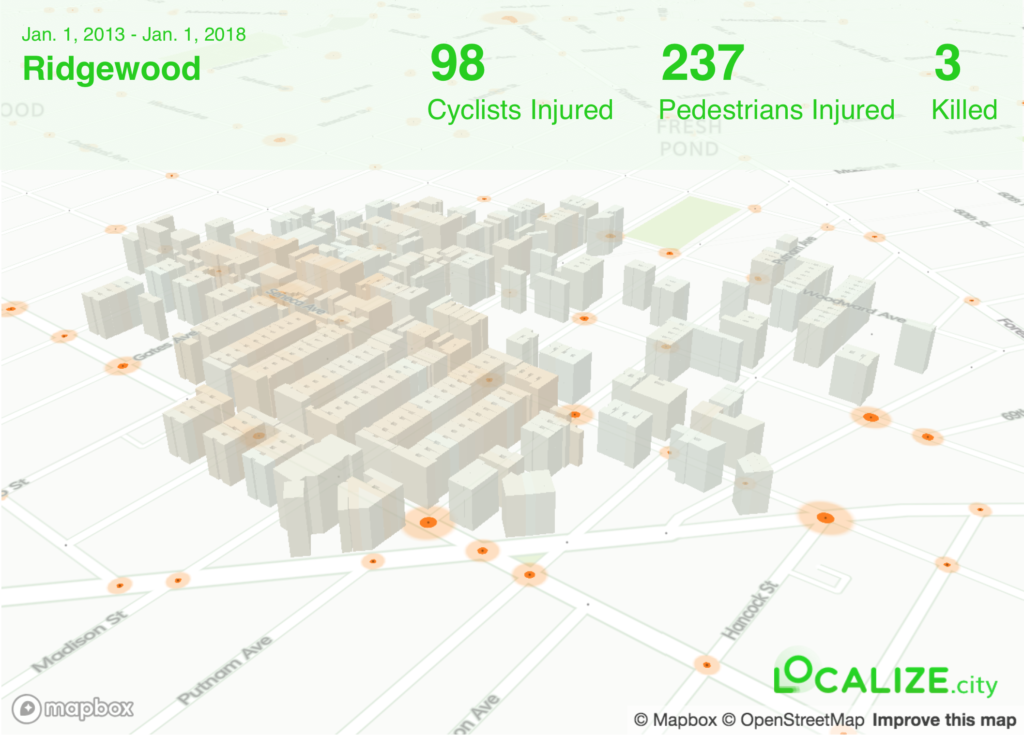 Ridgewood Crashes on the Rise After Safety Upgrades

The intersection of Myrtle Avenue and Wyckoff Street, which sits under elevated subway tracks on the border of Ridgewood and Bushwick, is a Vision Zero high priority intersection. The DOT installed a new pedestrian plaza at the intersection in December 2016, along with slightly rerouted buses, new street signs and street markings. 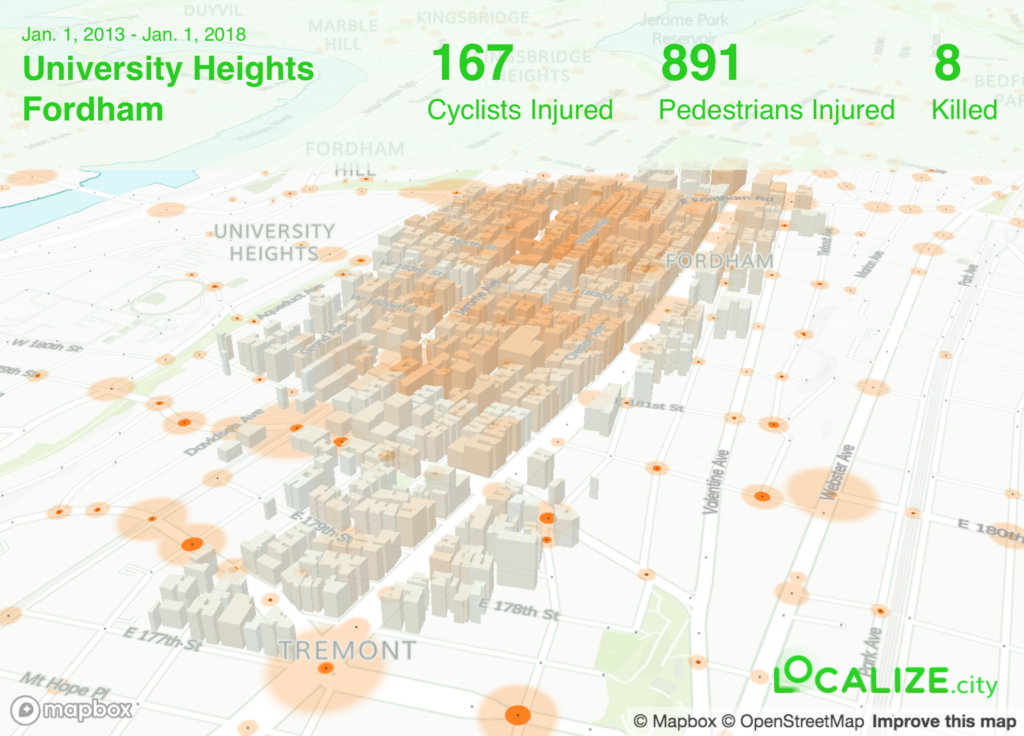 Localize.city identified another area getting more dangerous: around the border between University Heights and Fordham around Jerome Avenue as well just east of this thoroughfare, around the Grand Concourse in Fordham.

There were 230 crashes injuring pedestrians and cyclists in this swath of the Bronx in 2017. That’s a 16 percent increase from the average of 200 crashes in the previous few years.

“In addition to being under elevated tracks, Jerome Avenue is also lined with auto shops,” said Lassiter. “Having cars parked on, or constantly driving across, sidewalks can create a tough environment for pedestrians and cyclists to navigate safely. And crossing the many lanes of the Grand Concourse, or maneuvering the congested shopping corridor on Fordham Road, won’t get safer until physical improvements, like expanded sidewalks at intersections, are made.”

As part of the recent rezoning — which is expected to bring new development to the area — the city plans to improve pedestrian safety under the elevated tracks, as well as along the Grand Concourse. Advocates, however, have called on speeding up the safety upgrades. 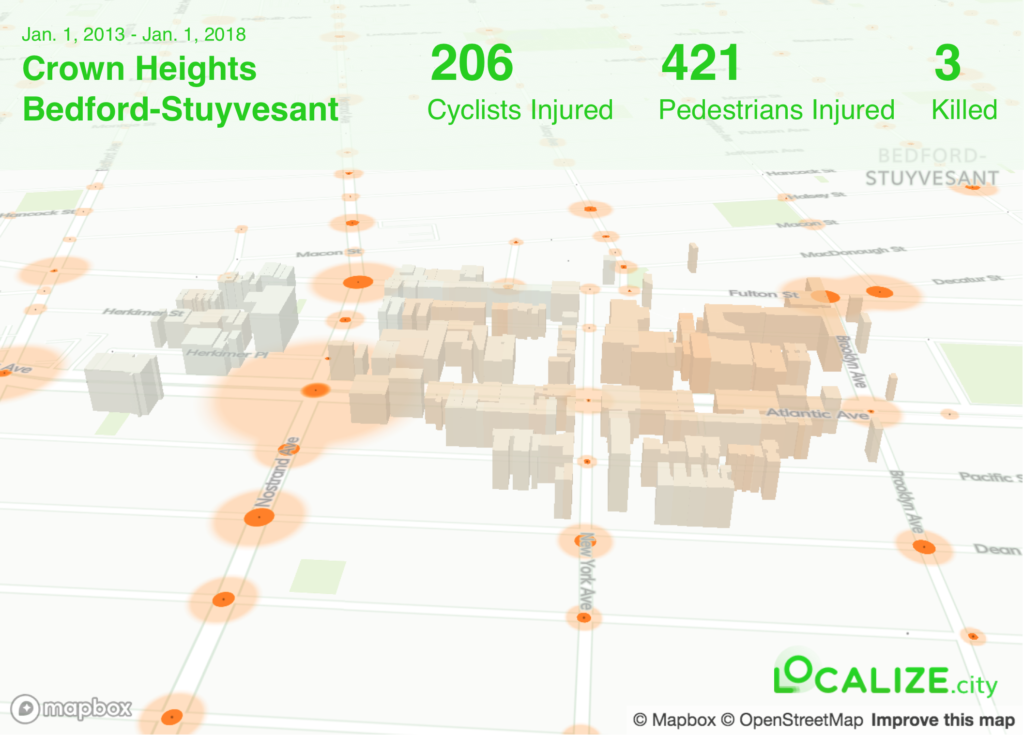 Crashes Dip along Atlantic Avenue Near Crown Heights and Bedford-Stuyvesant

Meanwhile, Localize.city uncovered that crashes were significantly down around Atlantic Avenue between Nostrand and Brooklyn Avenues, another area underneath train tracks for the Long Island Railroad. The number of pedestrian and cyclist injuries in this area on the Crown Heights/Bed-Stuy border dropped 22 percent in 2017. There were 103 injuries last year compared to the average of 132 injuries in years before. But as the population has grown in this area, and is expected to keep growing, the city has focused a lot of attention on improving safety along the entire stretch of Atlantic Avenue.

Do You Live Near a Dangerous Intersection?

By analyzing thousands of datasets in real-time, Localize.city shows locations of danger hot spots for pedestrians and cyclists across the city. New Yorkers can sign up to receive updates on whether safety upgrades are in the works — or whether streets around them are becoming more dangerous.

> Corona: general boundaries between 35th and Roosevelt Avenues, from 94th to 108th streets

Localize.city analyzed buildings across the city and then created an index, which takes into account the following: (1) the number of accidents nearby involving pedestrians or cyclists occurring at intersections, (2) the intersection type.

Breaking it down by intersection type allowed the analysis to include the most dangerous intersections for one-, two- and three-plus lanes in each borough and therefore uncovered some neighborhood hot spots on quiet, local streets.

To devise the most dangerous intersections by one-, two- and three-lanes by borough, the data scientists filtered the locations by looking at junctions where the number of crashes involving pedestrians or cyclists (using NYPD motor vehicle collisions data) that were above the 99.5 percentile in their category between 2013 to 2017, and between 2015 to 2017.

The analysis assembled the intersections based upon the NYC LION dataset (single-line street base dataset), filtering lines referring to roadways and identifying intersections by lines with two nodes on the edges that were common with other lines. Nodes that were within a 15-foot radius of one another were assembled into one node. The intersections were grouped into cells based on borough and number of lanes (one-, two- and at least three-lane roads). The three- or more lane roads were tagged as major roads in the LION dataset as were some 2-lane roads. Those two-lane roads identified as such were included in this analysis in the grouping with at least three-lanes. When the number of lanes differed between intersecting roads, the highest number of lanes was chosen.

The analysis looked at the sum of crash rates within a building’s 500-foot radius. Buildings were tagged as being located in dangerous areas when the summed-accidents rate was above the 99th percentile in the borough for a 5-year period and 2-year period (2013-17 and 2015-17). Buildings located in dangerous areas within a 200-foot radius of one another were merged into one cluster.