How Safe Are Your Neighborhood Streets?

When you’re looking to move, it is easy enough to look up the closest subway station, public school or playground.

It’s harder to know, however, how safe your walk to those places will be. And that knowledge is especially important if you have young children — since kids tend to stay close to home all day. It may not be surprising that three-quarters of child pedestrian fatalities occurred within 10 blocks of home, according to New York City Health Department data.

Localize.city is making it easier for New Yorkers to be informed about dangerous streets. The real estate website that shows the pros and cons of every NYC address, flags when buildings near their borough’s most dangerous intersections for pedestrians and cyclists.

For this report, Localize.city’s data science team focused on the diciest places where “neighborhood,” or one-lane streets, intersect, looking at where the most pedestrians and cyclists were injured in these types of intersections between January 2013 and January 2018. Roughly 40 percent of the city’s intersections have one lane streets.

Quieter, local streets may have less traffic than multi-lane ones and fewer overall crashes injuring pedestrians and cyclists, but many still may have hidden dangers. In the 20 most dangerous intersections uncovered by Localize.city, the average rate was one crash every 9 months. On the other hand, a typical one-lane intersection saw almost no crashes injuring a pedestrian or cyclist over 5 years.

In the map above, Localize.city identified and clustered the top 20 most dangerous one-lane intersections for pedestrians and cyclists.

“A lot of attention has been given to dangerous large avenues and thoroughfares in recent years — and rightly so. But remember that dangerous driving can, and does, still happen on quiet neighborhood streets,” said Localize.city urban planner Alon Goldstein.

Take, for example, the intersection of Kingston Avenue and Sterling Place in Crown Heights, where bike lanes have been added to calm traffic. The intersection still has seen at least one crash injuring pedestrians or cyclists every year since 2013.

“Over the past five years, nearly 8 percent of pedestrian and cyclist injuries or fatalities caused by traffic crashes occurred in single-lane intersections,” Localize.city data scientist Israel Schwartz said. “These intersections can be troublesome to those traversing them on a daily basis.”

“New York City needs to be redesigning all of its streets to comply with a Vision Zero design standard so people are safe getting where they need to go, whether they are on foot, on bike or in a vehicle,” said Thomas DeVito, senior director of advocacy at Transportation Alternatives. “This means dramatically expanding the implementation of curb extensions; daylighting every intersection; further automating enforcement against speeding, illegal parking, and right of way violations; as well as building out a comprehensive protected bike lane network. We know how to design streets so no one is killed in traffic, we need the courage to do it.”

> Find out if you live near a dangerous intersection. Look up your address at www.localize.city.

Many dangerous one-lane intersections are clustered together

Randy Perez, a 13-year-old, who lives in North Corona, was on his way to the library one Friday afternoon this past April when he was hit by an SUV at the intersection of 37th Avenue and 101st Street.

The SUV ran over Randy’s legs and sped off as the child screamed in pain.

The area around North Corona’s 37th Avenue and 101st Street is particularly dangerous. When tallying up the crashes that have happened over the last five years in this one-lane intersection as well as one a block away, more than a dozen pedestrians and cyclists were injured in all. 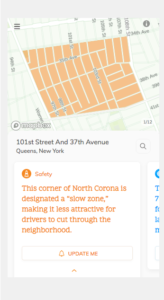 This area is clearly on the city Department of Transportation’s radar. It sits within a designated “slow zone,” with the speed limit lowered to 20 miles per hour. The zone, created in 2012, is supposed to discourage drivers from cutting through the neighborhood.

Whether it’s working, however, remains debatable as evidenced by the number of crashes in the area since the designation.

“After six years, the jury is still out on the effectiveness of Slow Zones around the city, though they have reduced crashes in places like London,” said Goldstein. “But the success of the community in requesting the zone in the first place suggests they may have the ability to organize around dangerous driving in the neighborhood.”

The city selected this area as a slow zone because of its concentration of schools, senior centers, daycares, subway stops and crash rates.

Other clusters of dangerous streets

Two of the clusters were on either side of the Williamsburg Bridge, where you have a heavy concentration of vehicle, bike, and pedestrian traffic all cramming into a narrow corridor — and busy residential areas — increasing the risk of crashes.

One was on the Lower East Side, where 18 pedestrians and cyclists were injured where Rivington intersects with Clinton and with Ludlow streets.

In Williamsburg’s cluster of dangerous one-lane intersections, the majority of the 24 people injured were cyclists, unlike in the other neighborhoods. Sixteen cyclists were injured over five years within a few blocks of one another.

The DOT completed several iterations of safety upgrades around the Williamsburg Bridge, but crashes have continued even after some recent changes. The DOT was continuing to focus on improving safety in advance of the planned L train shutdown. It’s unclear what will happen to some of those street safety upgrades as the L train project remains in flux. Even with a partial shutdown on nights and weekends, locals are worried about more chaos in the area as additional bicyclists, buses and others scramble to get from Brooklyn to Manhattan.

In Ditmas Park, two consecutive intersections on Newkirk Avenue — one at Argyle Road and one at Rugby Road — were hot spots, with a total 13 pedestrians and cyclists injured within the five-year time frame. There is no stop sign on Newkirk at Argyle, and cars make fast left turns there, often without yielding to pedestrians, some residents said. Others noted that as a driver, the sight lines are challenging in those intersections, forcing cars into the crosswalk. Compounding the issue, there’s a school nearby, P.S. 217, sometimes bringing crowds of families onto the sidewalks.

The 20 Most Dangerous “Neighborhood” Intersections for Pedestrians and Cyclists

Staten Island’s one-lane streets did not meet the threshold for the analysis and were therefore not included.

Stay informed on street safety issues near you.